A recent study, analysing the results of the 2016 Census, has concluded that, overall, the arts economy is in great shape. Concurrently, the Mossgreen disaster from late last year continues to unfold and unsettle confidence in the visual arts sector.

According to Queensland University of Technology (QUT) Distinguished Professor Stuart Cunningham, ‘the creative economy is in better shape than it’s ever been in, with jobs in creative services growing at three times the rate of the overall workforce.

Census data shows the percentage of Australians employed in creative industries has grown from 3.7% of the workforce in 1986 to 5.5% in 2016.

About 600,000 people are employed in the creative economy, which consists of two subsets: makers of original artistic content and those employed in creative services.

Makers of original artistic content include artists, musicians, writers and people employed in the performing and broadcasting industries. These arts professionals create copyrightable content and have access to wider tax concessions than those employed in creative services.

Creative services include architecture and design, advertising and marketing and computer software developers. Also included in this category are support professionals such as lawyers and accountants as well as ‘embedded’ professionals who perform work like art removal and documentation services.

It appears creative services are booming while makers of original content are struggling. ‘It is definitely still true that those in music and performing arts, and in visual arts, earn well below the Australian mean income – and their relative situation is stagnant or deteriorating’, Cunningham says.

Estimated number of people employed by the creative economy 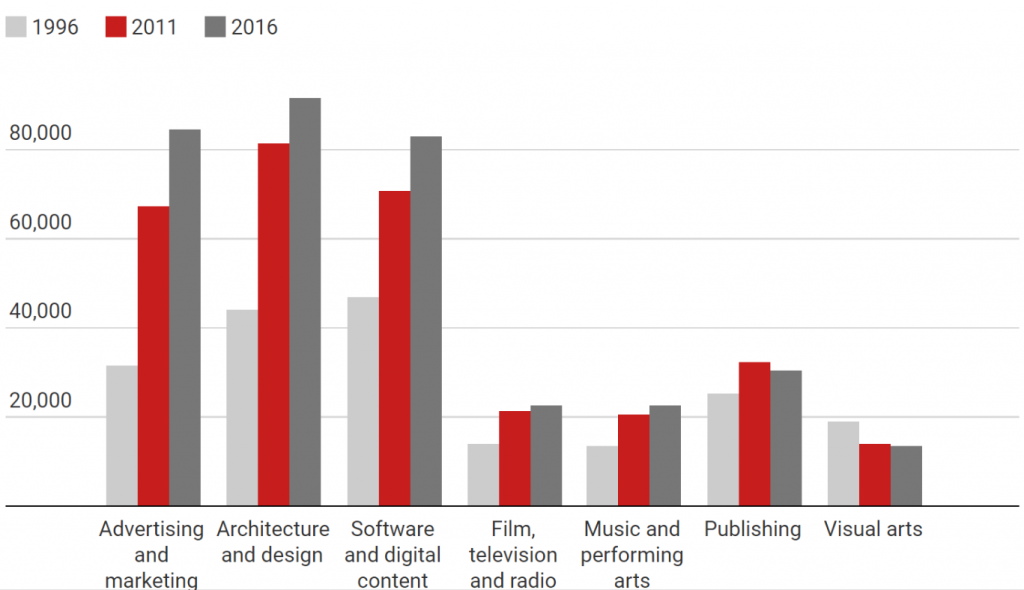 Cunningham cites a report from the University of Oxford, United Kingdom, on the future of work, which predicts retail and sales jobs will be increasingly affected by automation while those possessing creative skills will become more and more employable.

‘The creative services part of the creative economy is a highly innovative sector, with new jobs being created to satisfy new kinds of economic activity. Software and digital content, and new forms of social media management and marketing, are growing especially robustly as destinations for creative talent,” Cunningham says.

There has been no policy response to the latest Census results.

In relation to the makers of original artistic content, the Federal Government came to power in 2013 with no formal arts policy and it still does not have one. The Census results bare out a decline in Australian copyrightable activity even though the creative services are busier than ever. It would not be too hard to conclude that people in advertising, marketing and computer games are working on content created overseas.

In relation to the creative services itself, much debate has focused on the importance of STEM (science, technology, engineering and maths) learning to address Australia’s falling educational standards since Malcolm Turnbull became Prime Minister in 2015. Perhaps these results may help promote STEAM (STEM + the arts) as the way forward for innovation policy.

‘People should stop training radiologists now. It is just completely obvious that, within five years, deep learning is going to do better than radiologists.’
Geoff Hinton, University of Toronto, source: Hinton (2016).

Rumours concerning the financial instability of the Mossgreen auction house were confirmed on the last working day before Christmas last year when administrator BDO was appointed to take over its operations.

Managing Director Paul Sumner publicly promised, after he was removed as a director by the administrator, that no creditors would be out of pocket. He may have believed that Mossgreen had goodwill value, based on its high revenue (at least $20 million per year, half of that in art) and its extensive marketing. However, in the first week of 2018 BDO reported Mossgreen had a $9 million deficit of assets to liabilities – $12 million in liabilities and $3 million in assets.

Most of those assets represented cash at bank from the proceeds of auctions conducted by the company in the three months before Christmas, without passing on the net funds to the vendors for the consignment of their artworks and collectables. All up, it was reported that 400 vendors were owed a total of $5.8 million and were now ‘unsecured creditors’ to the company. 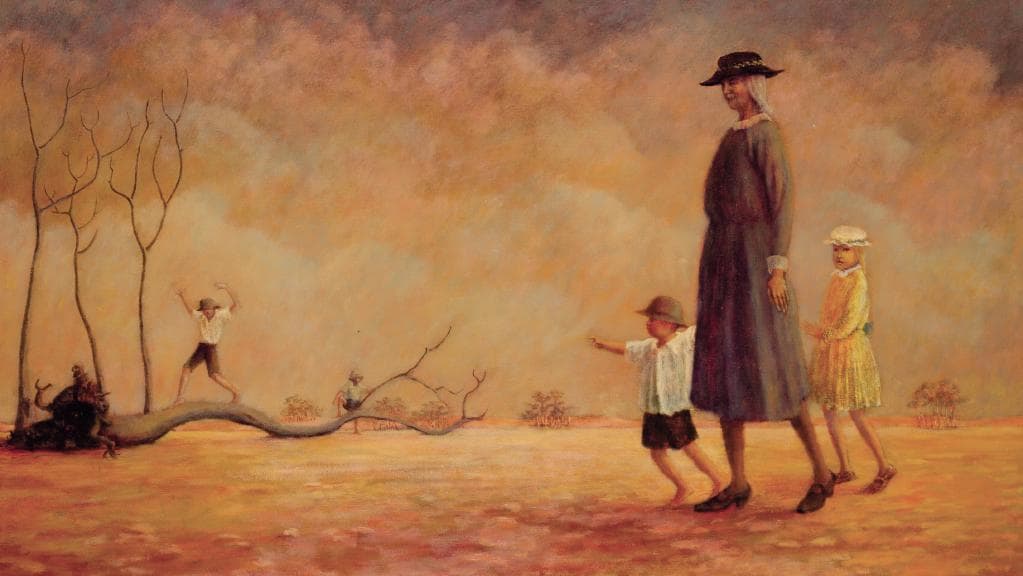 BDO was to report the final position of Mossgreen to the creditors by the end of January, however the books of account of the company were in such a state that the Federal Court approved an extension to the end of April for final accounting. Subsequently, it was reported Mossgreen was funding its operations from the proceeds of its vendors for the five years before its collapse.

Next to be caught in this unfolding disaster were the unwitting people who had consigned artworks and collectables to Mossgreen before the BDO appointment. Although BDO initially indicated they could collect their goods without charge, in February it was announced that, because of the storage and stocktaking costs incurred as well as the deficient company records, consignees would be charged $353 per lot to collect their valuables. Otherwise the goods would be considered abandoned and auctioned off. Currently BDO is seeking directions from the Federal Court about the validity of this collection charge.

In ‘Burn After Reading’, the CIA Supervisor asks himself ‘what did we learn?’ and answers ‘I guess we learned not to do it again’. That seems to be the public policy response to the Mossgreen disaster.

Auction houses in NSW and Victoria are not required to maintain a trust account to separate the proceeds of sale for its vendors. Should they now be compelled?

The arts industry is mainly regulated by reputation, but the Mossgreen disaster is an unprecedented Black Swan event. They are not coming back so there is no reputation to safeguard. Surely some protections now need to be put in place to quarantine vendor proceeds and consigned artworks and collectibles.

Clients of lawyers and real estate agents are protected by statutory schemes. Clients of other professionals, such as accountants, may rely on professional standards legislation to some extent. Applying similar measures to auction houses may be difficult, but not impossible.

Without a statutory or similar scheme, the very least protection government could offer to unsuspecting vendors is to ensure auction houses maintain a mandatory trust account for all sales over a certain limit, that is audited at least once a year. The reality for most auction houses is that the administration of its smaller sales is cumbersome and they would not be able to offer this service with the imposition of a trust account requirement. Bearing this in mind, then perhaps the threshold should be set at $10,000 per item, which seems to be a common law enforcement threshold for financial transactions. Austrac is one example of this threshold level.

I have not seen a comment about the Mossgreen disaster by any politician since BDO was appointed at Christmas last year, let alone suggestions as to how to avoid a repeat event. I guess the auction houses must learn not to do it again.

Unfortunately events like this taint the visual arts industry, making it more difficult for artists to find audiences for their work. And, despite the growth of the creative services economy, more than 50 employees of Mossgreen have lost their jobs.