Late last year the International Fund for Animal Welfare (IFAW) released ‘Under the Hammer – Are Auction Houses in Australia and New Zealand Contributing to the Demise of Elephants and Rhinos?’

According to IFAW, on average one elephant is killed every 15 minutes for its ivory: ‘No one would mistake the sound of an auctioneer’s gavel for a poacher’s rifle shot, but the distance between the two is closer than most of us realise.’

In response to this report, Leonard Joel became the first auction house in Australia to immediately ban the sale of rhino horn and non-antique ivory. Further, Leonard Joel released a signed company policy to ban all ivory sales by the end of 2018.

According to John Albrecht, Managing Director of Leonard Joel: ‘The recent IFAW campaign and their approach to me, put simply, got me thinking. I began to think about how detached we auctioneers have become from the regular ivory and occasional rhino that finds its way in to the decorative arts‘.

‘I began to think about the fact that I am an individual that cares for nature and animals and finally I was reminded about how not so long ago one of my children expressed disappointment with me that Leonard Joel had sold something from a Rhinoceros.’

Late last month, the Auctioneers and Valuers Association of Australia (AVAA) attended an industry briefing into the sale of ivory and rhino horn, however Leonard Joel remains the only auction house to implement a policy to prohibit the sale of these objects.

As a member of the AVAA, I support the policy position of Leonard Joel and call upon my fellow members to implement an industry-wide prohibition. It is clear from the IFAW report that the trade in these objects has a causal link to the poaching and slaughtering of elephants and rhinos.

Early in March, the Chinese government announced that it was phasing out the trade in fresh ivory. That is a welcome development but it does not amount to a ban on the sale of all ivory objects. This is where the real dispute lies within the auction industry.

Ivory originates from a tooth or tusk of an elephant and rhino horn’s origins are self-descriptive. As objects, ivory or rhino horn may be sold as ‘raw’, ‘worked’, ‘primarily ivory/rhino horn’ or ‘incidentally ivory/rhino horn’.
I do not think anyone in the auction industry supports the sale of raw ivory or rhino horn. In any event, such trade would breach Australia’s obligations to CITES (Convention on International Trade in Endangered Species of Wild Flora and Fauna). Note that Leonard Joel, Bonhams Australia and Raffan, Kelaher & Thomas are notable in mentioning CITES in relation to their auction practices.

In my opinion, the sale of ‘worked’, ‘primarily’ or ‘incidentally’ ivory or rhino horn as works of historical significance – that will have no impact on the slaughter of elephants and rhinos in the wild today – can only be done with water-tight provenance. Describing these objects as ‘old’, ‘antique’ or ‘vintage’ does not assist matters.
‘Under the Hammer’ provides a summary of the provenance information that accompanies the sale of ivory and rhino horn objects below: 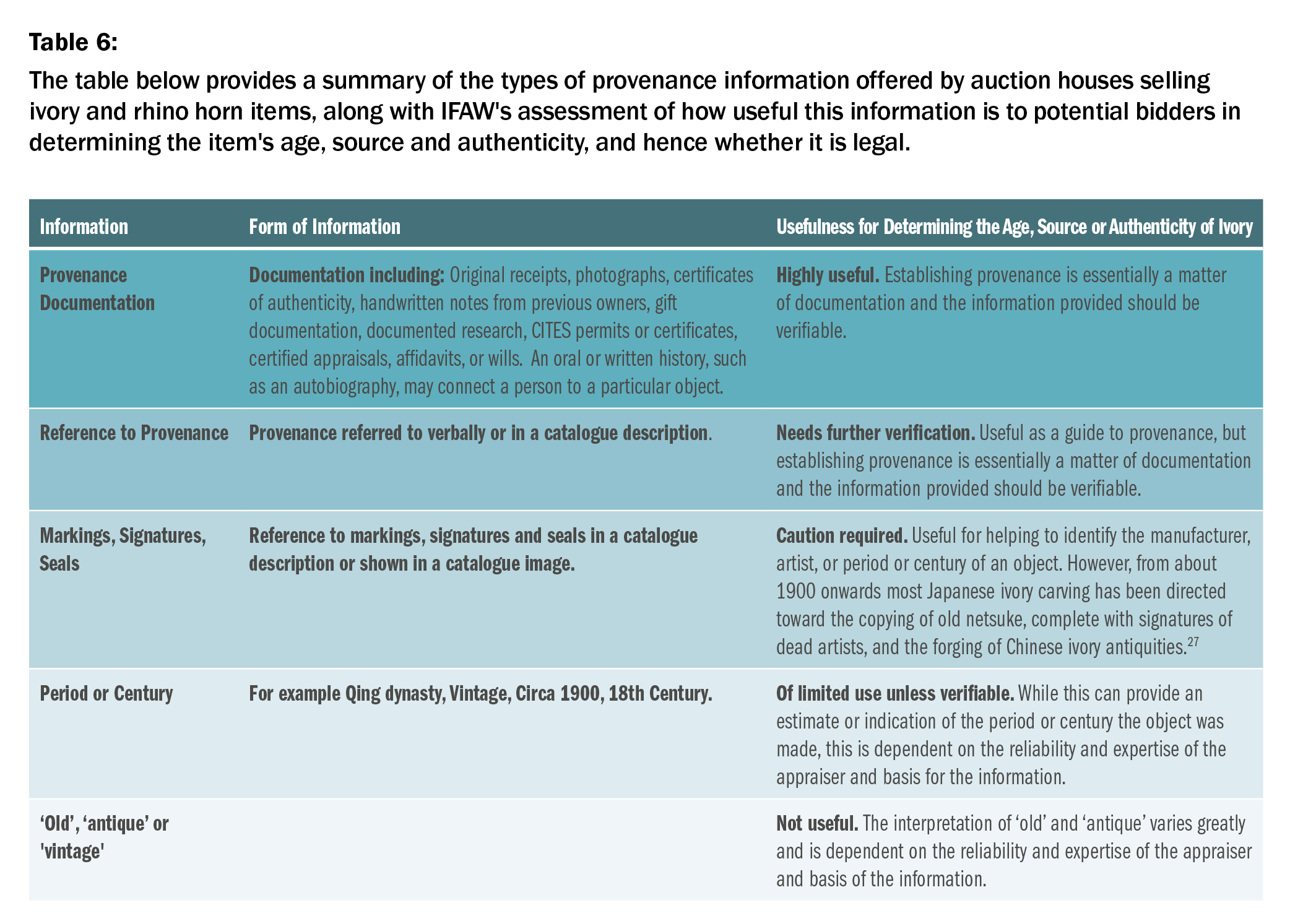 IFAW investigators found only 8% of the catalogue listings surveyed included comments on provenance, including referencing estates or collections and previous auction information. Almost half the lots surveyed were silent as to provenance, age and markings.

‘Under the Hammer’ summarises the usefulness of information provided by auction houses in determining age, source and authenticity of ivory and rhino horn objects below: 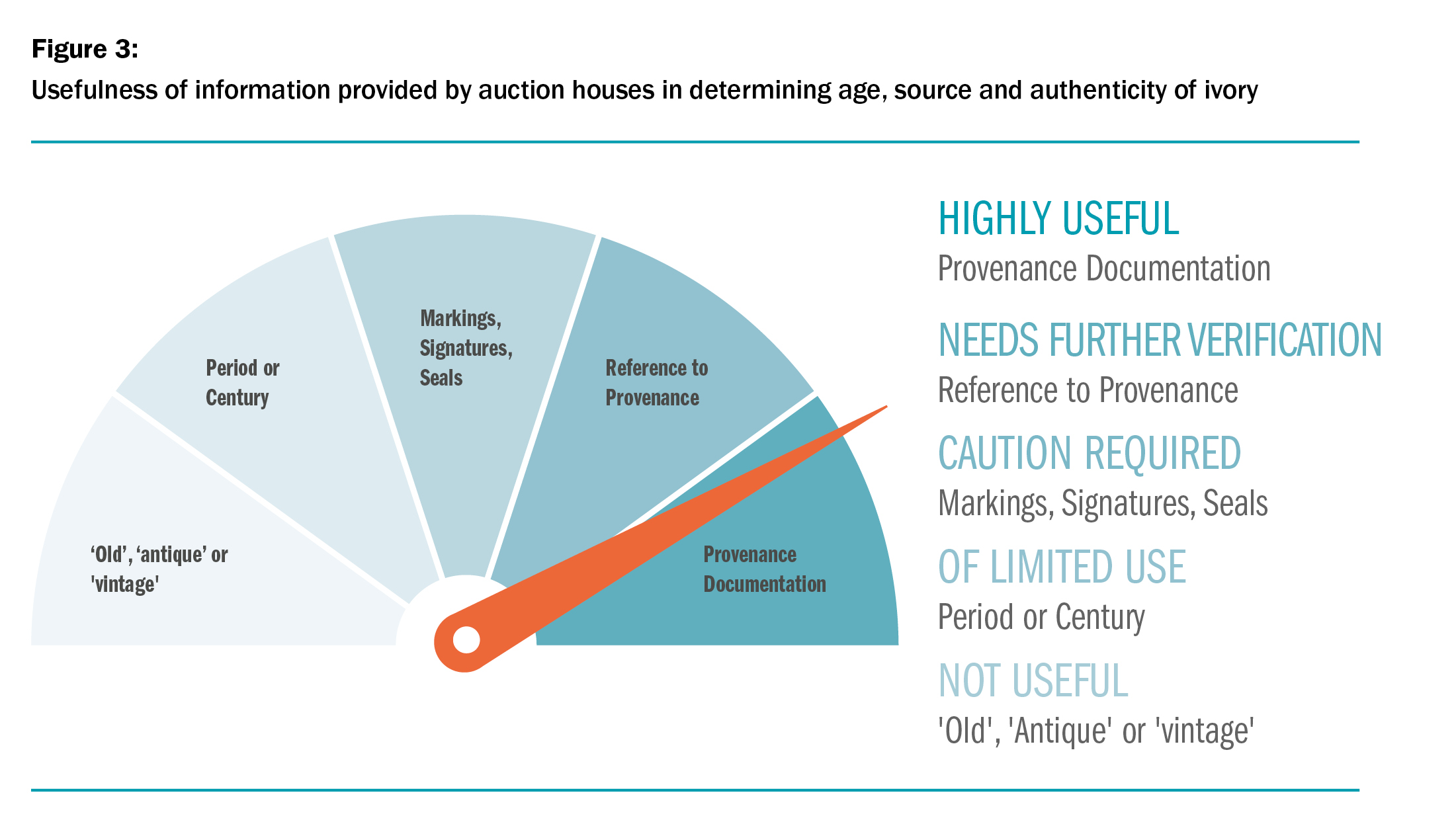 In summary, consumer demand for status symbols and cultural and ornamental items is driving unprecedented poaching and illegal trade of wildlife products across international borders. The high number of sales of lots without provenance suggests a lack of information regarding the legal requirements of the sale of ivory and rhino horn objects.

These are the recommendations of ‘Under the Hammer’:

If you suspect wildlife trade in the sale of ivory or rhino horn objects, please contact wildlifetrade.compliance@environment.gov.au in Australia or cites@doc.govt.nz in New Zealand.