This article was first published in The Age Spectrum on 27 April, 2019 and is reproduced here with permission from the author, Michael Shmith.

As 2018 marked the centenary of the formal end of World War I, this year Australians remember the period of repatriation that followed, the enormous task of returning soldiers from the battlefields of Europe and the Middle East. Monash University’s Faculty of Pharmacy and Pharmaceutical Sciences last year commissioned artist Christine Johnson to create artworks in remembrance of five pharmacy students who were victims of World War I. Johnson, who had been researching the life of botanist Eileen Ramsay (Ramsay’s brother, Alan Couve, was one of the students), chose a single wildflower to represent each soldier. In her artist’s statement, she writes: ‘‘The perishable nature of flowers is a metaphor for the fleeting quality of life.’’ In the following extracts from a book of the project, Johnson explains her floral choice for each soldier, while writer Michael Shmith tells their stories.

ALAN CRAWFORD COUVE
CJ: Cornflower, Centaurea cyanus. The cornflower has a noble pharmaceutical lineage, having been used in herbal medicines in Europe for centuries. There is also a direct military significance, as bleuets (cornflowers) are worn by the French on Remembrance Day. This reflects the Couve family’s French-Mauritian heritage.

MS: In the cold light of print of oﬃcial records, the short life and premature death of Alan ‘Dutchy’ Couve describes a trajectory all too familiar in times of conﬂict. The documentation of his story proves how swiftly he plummeted from ﬂedgling man of science to a bleak statistic of war …
Couve, by now promoted to ﬁrst lieutenant, led his men into battle on the ﬁrst day of the Anzac landing, April 25, 1915. He suﬀered a gunshot wound to the skull and died the following day. He was the ﬁrst College of Pharmacy student to be killed in World War I.
The Couve family was no different from the thousands of other Australian families affected by the ravages of war. The emotional effect of losing two sons would never leave them. After the Armistice, the surviving Couves left Dandenong to resettle in Red Cliffs, in the Mallee, opening the town’s first pharmacy, and researching local plant life.
Couve’s ﬁancee, Millie Veale, never recovered from her loss. She was described by a friend of the family as ‘’such a lovely person … so gentle and interesting and so sad that she never married after Dutchy was killed’’.

ERIC SIMSON BISSET
CJ: Yellow Buttons, Chrysocephalum apiculatum. Sunny Yellow Buttons grow profusely in the faculty garden and their cheerful faces made me think of Bisset’s youthful and sensitive gaze. I imagined him with his numerous brothers and sisters growing up in country Bendigo.

MS: The oﬃcial studio portrait of 27-year-old Private Eric Simson Bisset shows him in uniform, slouch hat and chinstrap ﬁrmly in place, head turned slightly to the right. It is a formal photograph, with a slightly ruminative, tense air, as if Bisset would rather have been somewhere else.
Bisset’s part in the Battle of the Somme began on October 6, 1916 when, newly transferred to the 53rd Battalion, he went oﬀ to ﬁght ‘in the ﬁeld’.
By mid-November, as the Somme oﬀensive was nearing its end, Bisset was among Australian troops manning the support trenches – those ‘ghastly ditches’ – behind the front line. On Tuesday, November 14, 1916 as the men were about to draw their breakfast rations, a German shell dropped into the trench, killing Bisset along with at least eight other men. Four days later, the Somme oﬀensive ﬁnally ended.

WALLACE GORDON JEWKES
CJ: Austral Indigo, Indigofera australis. Its delicate tracery reminded me of the old-fashioned practice of pressing flowers and enclosing them in letters. Many items of wartime correspondence contained pressed flowers as mementos or as tokens of tenderness. The Austral Indigo is one of many endemic species growing in Jewkes’ home town of Ballarat.

MS: In a letter dated January 9, 1917 written from the front line in France, 22-year-old Ballarat-born Lieutenant Wallace Gordon Jewkes, of the 39th Australian Infantry Battalion, told his parents.
‘‘If I should meet with bad luck and not get back I don’t want you to mourn for me but just think of it in the light that you have given a son in a great cause & that he did his duty as a man.
I’m afraid my personal belongings amount to practically air, but all there is will be sent home to you & if there is any money sent home I should like you to give it to the dependents of some soldier killed in action, it will be very little I know, but it will serve to show an oﬃcer’s appreciation of his men & I can tell you they are marvels, & the ﬁnest chaps one could wish to meet …’’
The next night, January 10, on a raid on German trenches at Houplines, Armentieres, he was shot in the head.

MALCOLM JONES
CJ: Tea tree, Leptospermum. I have chosen the Tea tree flower to mark a stark contrast to the unspeakable suffering and wretched conditions of October 4, 1917 the day Malcolm Jones was killed at Passchendaele. The plant has a bright open flower; its five small petals radiate out with the sweet innocence of arms-open-wide of a child.

MS: Malcolm Jones was 18 years and 10 months old when he enlisted in December 1915 and by the time he was killed in action in a shell attack at Zonnebeke, near Ypres, on October 4, 1917 he was still two months shy of 21.
Jones had studied at the Melbourne College of Pharmacy, along with his older brother, Allan Murray Jones; they were both apprenticed to their father, John Albert Jones, manufacturing chemist, of Caulﬁeld East; and they both cut their studies short to go to war.
A cruel and random act of war would essentially not only rob the Jones family of a beloved son and brother, but eﬀace from destiny one yet to establish his professional mark and perhaps marry and raise his own family.
His body was never found, but his name is inscribed along with those of more than 6000 other fallen AIF comrades at the Menin Gate memorial at Ypres.

MS: Frank Cahir’s wartime story is extraordinary in its vividness and immediacy. Not just of what he accomplished during the war, but after it.
Between 1914 and 1918, Private (later Staﬀ-Sergeant) Cahir served with two ﬁeld ambulance units in Egypt and Turkey and the Western Front, respectively. A letter to his home from Gallipoli was the antithesis of ‘the very tame accounts’ being received at home.
‘‘Those ﬁrst few days are like a huge nightmare to us, but the work our men did was glorious. Carrying men from oﬀ the top of the hills under an awful hail of shrapnel, but the thanks and grips of the hands of the dying and wounded would only spur you on to do more.’’
Cahir’s war did not end with the Armistice. Instead of joining his compatriots and catching the next boat home. He stayed on for two-and-a-half years as one of 1100 Australian volunteers working for the Graves Detachment units of the AIF. His service vocation of ferrying and tending to the wounded and the dying was now changed to one of search-and-exhumation – helping ﬁnd and then identify the thousands of dead Australians whose bodies lay in those cold, hard foreign ﬁelds of northern Europe.
Cahir’s work as a unit photographer was described by his grandson, Fred, as ‘a grisly task that inevitably exacted a tremendous toll’. But there was ultimate resolution, too: a form of peace for the grieving families who at last, sometimes after many years, ﬁnally knew the remains of their loved ones could receive a proper burial or memorial.
On board SS Demosthenes Cahir struck up a conversation with a young Irish woman from Liverpool, Mabel Murray … they married on October 7, at St John’s Church, East Melbourne.
Frank and Mabel would be married for just six-and-a-half years. They had three sons, born over three years: Francis (Jim); Patrick (Pat); and Vincent (Vin).
Until comparatively recently, the Cahir family believed Frank died as a result of war wounds. The truth only emerged after one of his grandsons was researching in the Public Records Oﬃce, and found a newspaper cutting from May 1928, under the headline DEATH IN DOCTOR’S ROOM:
‘‘While working at the shop of E G Owen, chemist, Collins Street, city, yesterday morning, Frank Cahir, chemist’s assistant, of Leicester Street, Preston, complained that he felt ill. And he visited a doctor a few doors away. The doctor suggested that he should go home, but Cahir replied that he had no home to which he could go. The doctor then told Cahir to rest in a spare room at the rear of the building. When the doctor visited him half an hour later Cahir was much worse, and he died a few minutes afterwards.
Plain-clothes Constable Evans of Russell Street has reported that when Cahir was lifted from the ﬂoor an empty bottle, which had contained poison, fell from his coat pocket. The doctor expressed the opinion that death was due to poisoning.’’
Frank’s grandson, John Cahir, reﬂecting on Frank’s untimely death, said: ‘’In some way, shape or form, World War I, that’s what got him.’’ 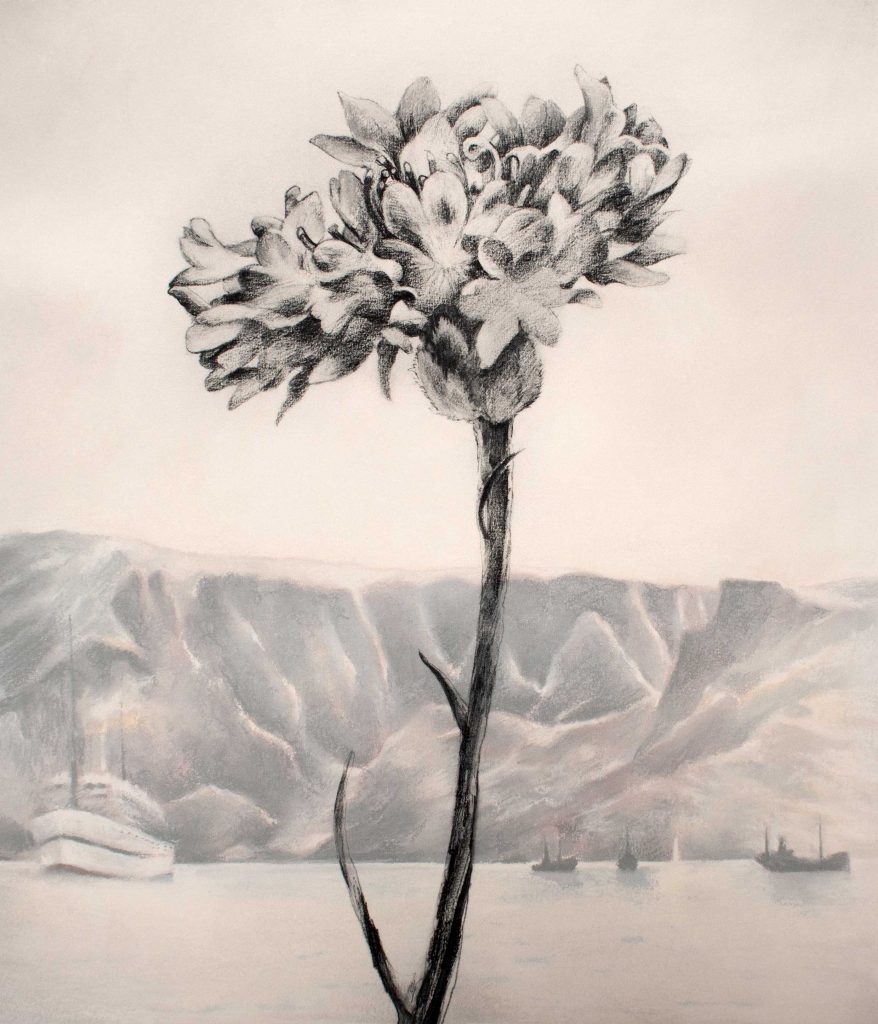 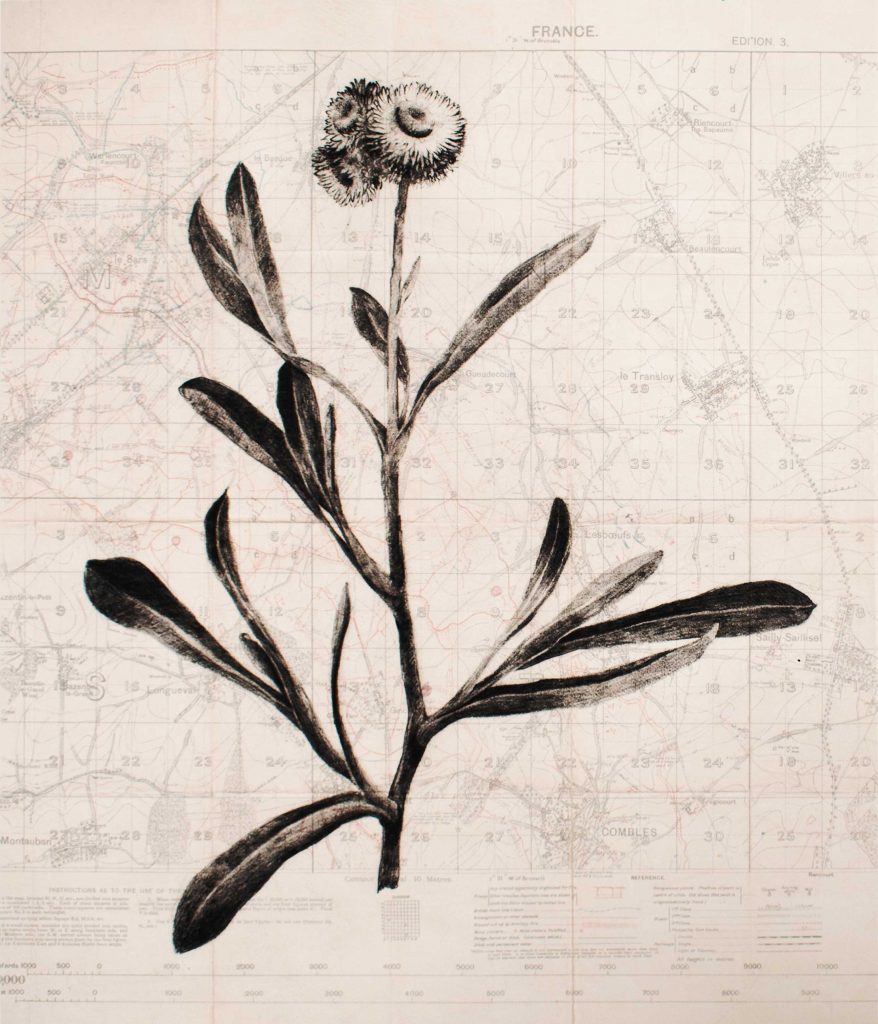 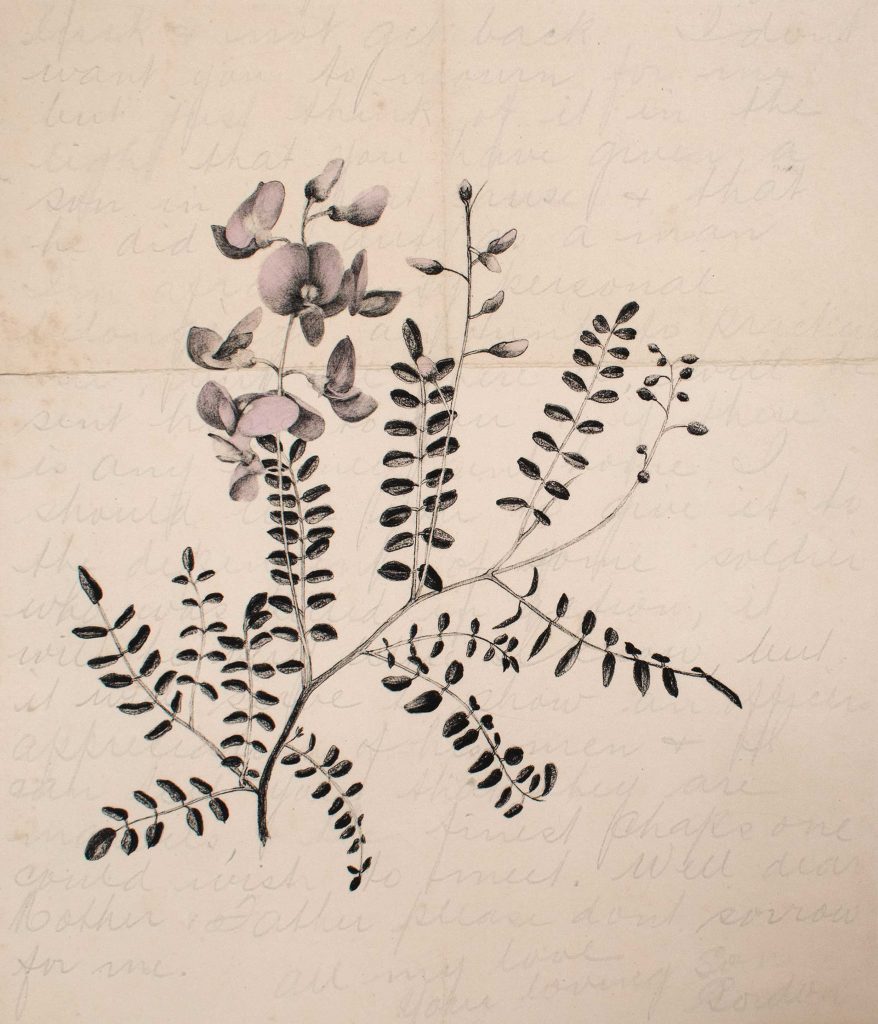 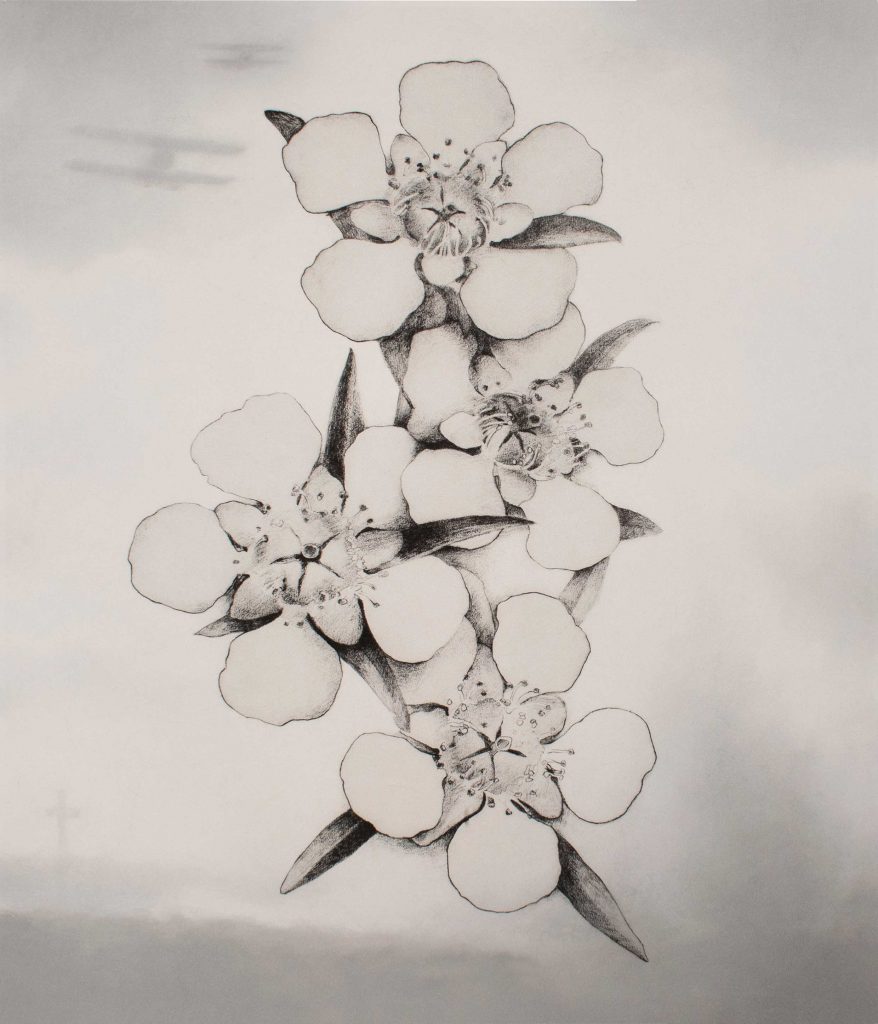 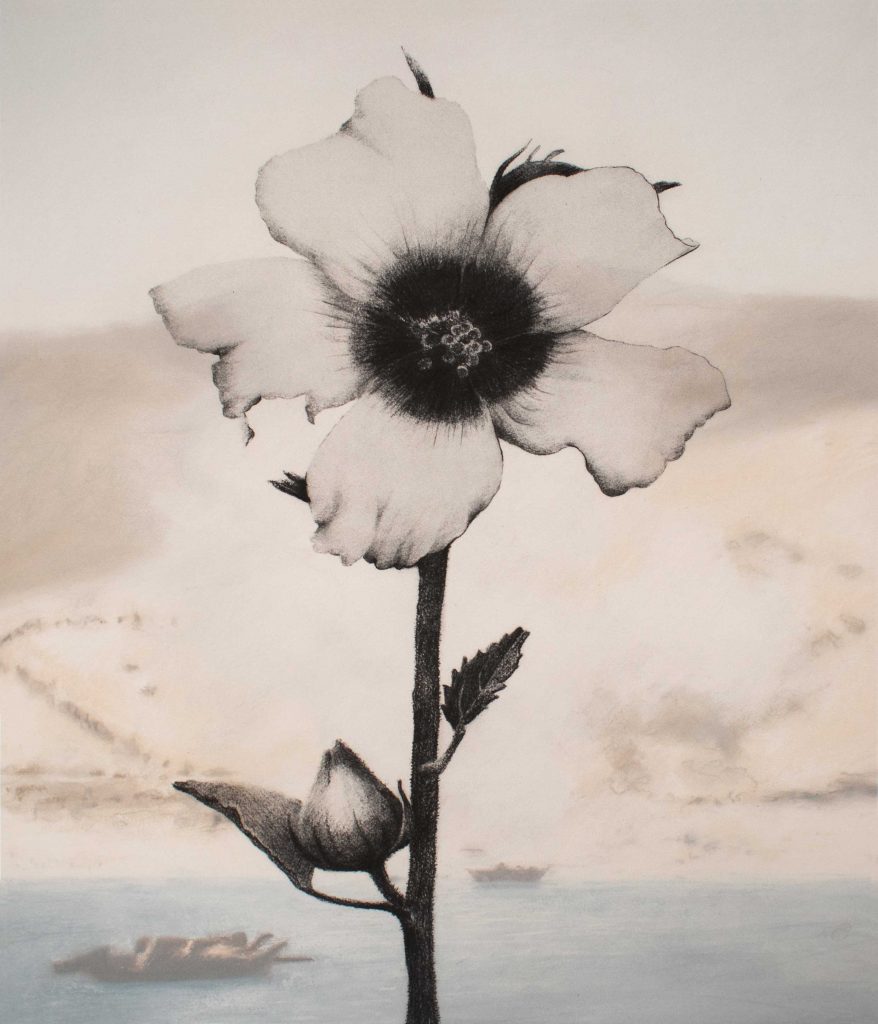